The conventional wisdom with regard to cellular call detail record analysis is that it is a tool primarily used by law enforcement to help prove or disprove the location of a criminal suspect in a given incident.  More and more, however, we’re seeing uses for cellular call detail record (CDR) analysis and mapping in the civil litigation world, too.  We’ll be discussing one such case in this article.

As a brief disclaimer, the exact locations of the houses of the parties involved in this case have been changed for confidentiality, but the rough geographical area and the cell tower information is the same.  This is a live case which we worked and was recently concluded.  So if you still don’t think that CDR analysis can be of use in your civil case, keep reading and let us help change your mind!

In July, 2016, we received a call from a divorced client who was seeking to have his alimony agreement reviewed by the Court.  He had been divorced from his ex-wife for a number of years, but his spousal support agreement was costing him thousands of dollars every year, so he was researching ways to show that his ex-wife was not in compliance with the agreement.  Like many alimony agreements, his stipulated that if the ex-wife cohabitated with anyone for a period of 12 months or more, the client would be released from the alimony agreement.  The client, a very savvy and smart businessman in his own right, had already hired a traditional private investigator for surveillance, but the requirements to prove his suspicion in this case were too great and costly for that to be a viable year-long solution.  However, he surmised that if he could obtain the cellular call detail records for his ex-wife’s paramour for a period of 12 months and illustrate that he never stayed at his listed residence and always stayed at the ex-wife’s residence during the 12-month period, it would constitute cohabitation.  The client called us and we assisted with subpoena language, consultation, cellular record analysis and mapping.

The paramour’s cellular provider is Verizon Wireless.  His listed address is also the address on the cellular account, which made proving where he claimed to live a simple matter.  Both houses’ locations were verified through GPS coordinates and were not that far apart, but as you’ll see, they were far enough apart to make a difference in this case.

Verifying the data is always a part of best practices.  To that end, we traveled to and physically verified the GPS coordinates of the houses of interest and the cellular towers primarily involved in this case.  We further verified the type of cellular device the paramour was using through Verizon Wireless and spent some time on the phone with technicians from Verizon Wireless to ensure the analysis in this case was accurate.

Verizon Wireless records are provided in a series of Excel spreadsheets.  The call detail records (CDRs) for the requested time period are in one spreadsheet and another details every tower in every switch in every locality that the device connected to for the requested period.  It further details the GPS coordinates of those towers, the sectors (sides) of the towers and the azimuth and beam width of the given sectors.  CDRs do not provide cellular signal range, but we can estimate the range by identifying the next closest tower of the same provider (one of which also happened to be a relevant tower in this case), measure the total distance and calculate 60% of that distance for the range of each tower in that direction.

Finally, timing of use was a primary issue.  Because the paramour had a job that required him to travel all over the local area (in addition to out-of-state locations), the time frame for the analysis was restricted from 2100 hrs. to 0700 hrs. every day for all 12 months.  This would help demonstrate where the paramour may actually be laying his head at night.  In presenting our final report, we tallied the percentage of times calls were made from 2100 hrs. to 0700 hrs. on the towers that would likely service both the paramour’s listed residence and the ex-wife’s residence on a month-by-month basis.  The final numbers were greatly skewed toward the tower and sectors servicing the ex-wife’s house.

As you can imagine, this was a large amount of data to analyze, map and report.  Additionally, condensing over 12 month’s worth of cellular call data into a concise, easy to understand report was vital in this case.  To add to the challenges, the ex-wife’s residence lie on the border of two sectors of the tower that was closest to it, so if a call were made in the front driveway, it may “ping” off of sector gamma, but if a call were made from the back of the house, it pay “ping” off of sector beta (see graphic below).  This proved in the end to be an asset because it increased the percentages of calls that the paramour was making that hit off of that tower and those sectors.

Mapping the locations of houses, cell towers and sectors in this case was essential.  To ensure a concise illustration, the data was pared down to the two relevant towers, three overall relevant sectors between them and the two relevant locations – the ex-wife’s house and the paramour’s listed residence.  When the data is distilled down, here’s what the map looked like: 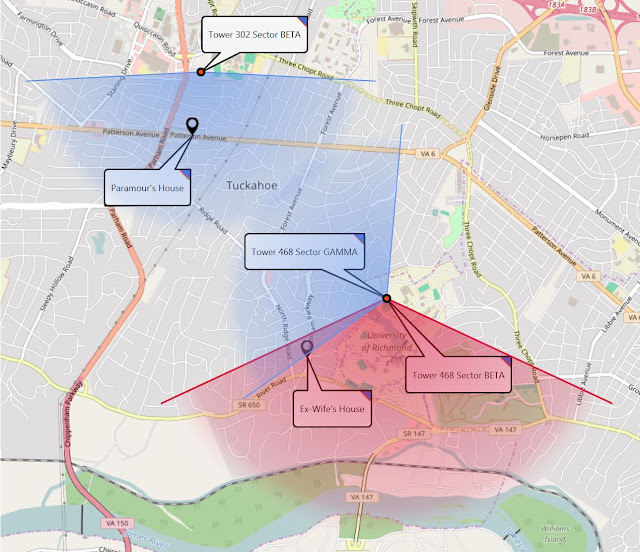 As we stated in the final report, there are a number of factors that can affect the range of cell towers.  Terrain, tower load (use at a particular time), maintenance, weather, etc.  The pie-shaped wedges illustrated here are estimates and should be considered rough operational ranges.

Despite continued challenges from the opposing party throughout this case and receiving a subpoena to appear in court to testify as to our findings, the case settled to our client’s satisfaction about a week before trial.  The client’s attorney in the case emailed to say “I believe that a big reason it resolved was your report.”  Feedback like that is fantastic to hear.  This case involved many hours of tedious analysis work and we’re very happy it turned out postively for the client.

The value of cellular call detail record data in any number of cases should not be overlooked.  Recently, I was discussing mobile data with some personal injury attorneys.  The challenge in distracted driving cases, for instance, is that the device that may have been in use may be long gone by the time litigation and discovery comes around.  Other evidence, such as cellular call detail records, can prove very useful and should be considered as a valuable resource of information in civil cases ranging from alimony to employment disputes to personal injury.

We Find the Truth for a Living!
Computer Forensics -- Mobile Forensics -- Specialized Investigation
About the Author:
Patrick Siewert is the Principal Consultant of Pro Digital Forensic Consulting, based in Richmond, Virginia.  In 15 years of law enforcement, he investigated hundreds of high-tech crimes, incorporating digital forensics into the investigations, and was responsible for investigating some of the highest jury and plea bargain child exploitation investigations in Virginia court history.  Patrick is a graduate of SCERS, BCERT, the Reid School of Interview & Interrogation and multiple online investigation schools (among others). He continues to hone his digital forensic expertise in the private sector while growing his consulting & investigation business marketed toward litigators, professional investigators and corporations, while keeping in touch with the public safety community as a Law Enforcement Instructor.
Email:  ProDigitalConsulting@gmail.com
Web: www.ProDigital4n6.com
Linked In: https://www.linkedin.com/company/professional-digital-forensic-consulting-llc
Twitter: @ProDigital4n6
Posted by Pro Digital Forensic Consulting at 7:44 PM