About Those Other Texting Apps in iOS…

About Those Other Texting Apps in iOS…

In the age of ubiquitous mobile device usage and the seemingly ever-present need for digital evidence in the form of text messages to be used in legal proceedings, we see lots of requests for forensic data retrieval of standard (SMS & MMS) text message retrieval, Snap Chat messages, Facebook Messenger Messages, iMessages and the like.  What is not so often discussed is the need for text messaging data from other apps that may not be as popular or supported by any of the major mobile forensic tools. Toward that end, this article will explore a sample of them.

To facilitate this analysis, we conducted an advanced logical encrypted data extraction from an iPhone 8 Plus running iOS 11.3.  The extraction was conducted using Cellebrite Physical Analyzer v. 7.2.1.4.  Among the apps explored are:

Magic Jack:  An app used to provide an alternative phone number to the mobile device.  Currently at Pro Digital, the phone number is through Magic Jack and many clients send and receive text messages on this number

Sideline:  Another app used to provide an alternative phone number to the mobile device, other than the primary wireless number.  Some test text messages were sent using Sideline.

Discord:  An app used primarily by gamers to communicate.  The app has both mobile and desktop functionality.

Linked In:  The popular professional social networking app, with built-in messaging capability for both mobile and desktop/web application.

The main database within Magic Jack that stores not only text messages, but contacts, phone calls, etc. is storage-##########.sqlite (where the # is the phone number assigned to the app/device by Magic Jack.  Within that database, the “message” table specifically stores messages between the user and those contacting the user.  Each conversation with a given party is given a “conversation ID”, making following of the conversation back-and-forth relatively simple, even if the party is not readily identified by name or phone number.  It is prudent to also note that Magic Jack does ask for permission to access contacts contained within the main iPhone contact database and when permission is granted, those contacts are also present within the Magic Jack sqlite database.  Also notable is the fact that each messages is assigned a “message ID” in sequential order.  This could mean that if a message were deleted, the sequence would show missing numbers, much like in the iPhone pictures/images database.

Figure 1 below shows a sample of what the Magic Jack message database looks like in Cellebrite PA:

Also present in the “Message” table are dates and times of delivery of each message and the length (in characters) of each message.  None of this data is encrypted, beyond the encryption of the device itself.  All of this data is also historical, meaning the data contained in this database has been carried over through multiple devices.

An interesting little nugget that I didn’t know before conducting these tests is the fact that Sideline is part of the Pinger/Textfree family.  The file path for the Sqlite Database in this instance is “com.pinger.side.line” and the main database where the information we are researching is stored is “Textfree.sqlite”.  In fact, the IEF report viewer lists these artifacts under “Text Free” as indicated below in Figure 2.  This is notable because the Textfree app is not present on the device, only Sideline is. 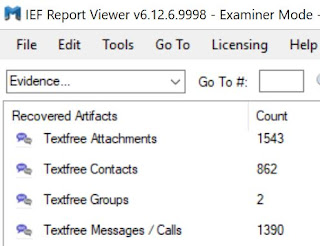 The table in which all of the messages are stores is “ZEVENT” and contains not only test text messages sent to and from the app, but all voice-to-text translations of voicemail messages.  This is very helpful when potentially researching voicemails that have either been deleted and/or are not part of the main iPhone voicemail database .amr files.  Also of note, as displayed in Figure 3, is the existence of the IP address with each phone call received and answered.  For example, the IP address of 67.231.9.110 is listed in the table for certain answered calls and renders back to Bandwidth.com, which is listed on Search.org as being in Raleigh, NC.  I’m not exactly sure what Bandwidth.com has to do with Sideline, Pinger or Textfree, but it does offer another investigative angle.

Also present in this database under the “ZCONTACT” table are all synced contacts within the iPhone by name.

Although the encrypted advanced logical extraction was conducted on the device in this instance, there is very limited data obtained from both Linked In and Discord, especially as it relates to messaging.  This is likely due to one of three explanations – the data is either stored in the cloud, encoded or encrypted (or a combination thereof).  For what it’s worth, no large SQLite database files were discovered with either of these apps, only .plist files and smaller SQLite databases containing limited information.

Discord, in particular, is used by gamers, many of whom are children.  Investigators involved in child exploitation investigations should pay particular attention to this app if present on the device and attempt to document the data by whatever means possible.

While IEF indicates that there is support for Instagram in the “Social Network” category list as seen in Figure 4, there are no recoverable Instagram messages parsed out in IEF: 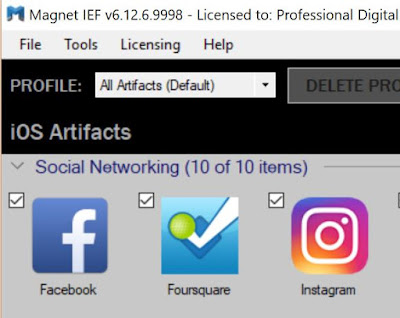 Conversely, there were many Facebook Messenger messages obtained by IEF as detailed below in Figure 5.  This is of particular note as many have asked across digital forensic list serves about the potential presence and recovery of Facebook Messenger messages.  While not every bit of information is readily apparent in IEF (i.e., the other party involved in the message), identifying the sender and receiver is a simple matter of looking in the detail tab to identify the Facebook user IDs involved in the chat.

Those of us familiar with the strengths and limitations of the commonly used commercially available mobile forensic tools know their limitations very well.  Experiments like these start to push us beyond what is natively supported and help us take a deeper dive into the data to see what (sort of) hidden gems exist beyond what is served up on a silver platter.  There’s a ton of data out there to be had.  Companies like Cellebrite, Oxygen, MSAB and Magnet Forensics can’t be expected to support every version of every app.  It’s simply not possible, or if it were, the costs for these tools would be astronomically higher than they are now.

It is incumbent upon the examiner to know what to look for, where to look for it (i.e., how to find it) and how to read and interpret what they find.  Missing valuable data can mean the difference between determining culpable or responsible parties in civil matters or not and in criminal cases, could mean the difference between guilt or innocence.

Patrick Siewert is the Principal Consultant of Pro Digital Forensic Consulting, based in Richmond, Virginia.  In 15 years of law enforcement, he investigated hundreds of high-tech crimes, incorporating digital forensics into the investigations, and was responsible for investigating some of the highest jury and plea bargain child exploitation investigations in Virginia court history.  Patrick is a graduate of SCERS, BCERT, the Reid School of Interview & Interrogation and multiple online investigation schools (among others).  He is a Cellebrite Certified Operator and Physical Analyst.  He continues to hone his digital forensic expertise in the private sector while growing his consulting & investigation business marketed toward litigators, professional investigators and corporations, while keeping in touch with the public safety community as a Law Enforcement Instructor.

Posted by Pro Digital Forensic Consulting at 10:26 AM